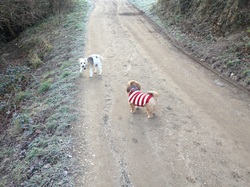 Diane has been walking my little dog Daisy for over 7 years now and has proved to be reliable and considerate, kind and cheerful. Daisy loves her! I couldn't do without her!
Mrs Howard; Eckington

I have known Diane for a lot of years now. Diane has been walking and taking care of Cleo for over a year and half now. She is fantastic with Cleo and Ive always find that she goes out of her way to help. Last year i went through a breakup and started my own business up. Things got bad with Cleo and I was going to have to re home her but with Diane's help walking and caring for her, Cleo seemed to settle down and is now in a routine. Diane is very trustworthy, reliable and I really highly recommend her. Not only do I feel at ease with her coming into the house when I'm not in, I know Cleo absoutly loves her walks and of course Diane.
Zara Lockwood and Cleo- Eckington 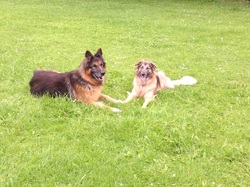 I first met Diane from dog dilemmas about 1 year ago and after trying 3 other training schools I know it was right for my dog freya who I rescued at 7months and was agressive to other dogs and men. We had 1-1 training with other dogs being introduced and also meeting different men. Freya 1 year on is a totally different dog I can now walk down the street without her barking at dogs and people.  Thanks Diane
Lelena Kirkwood and Freya


We have been with Diane at 101 Dog Dilemmas for a good few years now. We did try other trainers with our very nervous German Shepard Nel but none was working. We found Diane and how lucky Nel was to find her. With time and patience Diane took her from a nervous wreck to a very confident and proud to own dog. Having 4 dogs, cats, rabbits, guinea pig and Macaws, Diane looks after all of them when we go away. We have no worries that our little menagerie is in safe lovable hands. Now our 7 month old Frenchie is enjoying training with Diane.
Gillian with 'Nel' German Shepard.

I was referred to 101 dog dilemmas dog training by a relative who has used Diane for dog walking for a few years and she came highly recommended. My German Shepard was a boisterous and very energetic 4 month old puppy when we began training as I was worried he may become difficult to handle/train as he grew into adulthood. Diane began the training with simple commands and agility training. Blu quickly picked up the training and enjoys his weekly training regime. The training tires him out physically and mentally as well as giving him lots of fun. Over the months he has become much more obedient and walking him on the lead is no longer a chore. Diane is professional, friendly and has a real passion about her job. I would recommend dog dilemmas training for anyone needing a dog walker and trainer.
Kay with 'Blu' German Shepard.

For over 2 years Diane has been such an asset to the family. She came recommended to me from a friend and my 2 Dalmations absolutely love her and are so happy to see her when she comes, they are not easy dogs to walk. My older dog
Jake is a very sociable old man who likes to sniff and investigate everyone and everything, but my other dog Pebbles is the total opposite. She is a rescue pup and came with many social problems including being extremely nervous towards
other dogs making her snappy at times. Diane was more than happy to take on these two different characters and handles them fantasically on walks, they always come back happy and tired. Jake is also on prescription medication and
food, and Diane is happy to assist with this as well as cleaning both dogs down after a messy walk. Diane has never let me down for a walk even when i ask at the last minute due to illness or work changes, she always manages to help out.

When me and my husband planned our wedding, having our dogs with me was an obvious choice, knowing we will be very busy on the day, there was no question in asking Diane to help us out. The day was amazing, with Pebbles
walking down the aisle with me and Jake waiting at the bottom with the groom party.  Diane was there all day to handle them during the service and in-between photos. Our photos were not just on site but also at Padley Gorge, where once
again Diane came with us and handled Jake & Pebbles in-between shoots.  The day was fantastic and went without a hitch, the photos have come out exactly how we wanted then to with the dogs. We could not have achieved such a perfect day
without Diane's help. I have recommended her to my friends and they now use Diane to, and i have no problems in recommending her to anyone looking for a dog walker.
Matt and Kelly Wooller - Jake and Pebbles.